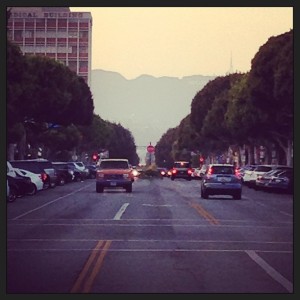 I just came back from a walk to Larchmont Village with Eric. Just today, I realized that on May 1st, I will have lived in my building and this neighborhood for 15 years. For a person who had 12 different addresses between the ages of 21 and 28, that’s a long time in one place. I have a cousin who used to tease me that she always wrote my address in pencil in her address book. I remember when I first moved to Los Angeles and would drive down my street, I would look at my building and think, someday, I want to live there. I thought it was a sign from the universe when I became friends with a person that lived here. Eventually, when an apartment in the building opened, I moved into a studio. A couple years later, I moved into the one bedroom with French windows and a view of the Ravenswood sign that I live in now. Even still, when people ask me where I live and I tell them the street then describe the building, they often cry, “I LOVE that building.” I always downplay it by saying the management never fixes anything and the hallways look like “The Shining,” but deep down, it’s a source of pride. I love my apartment, I love my building, I love my neighborhood. I love that when I run into people I haven’t seen for a few years, they ask me if I still live in Larchmont. Of course, I still live here. Where would I go? Just like being from Kansas, or the son of Ray and Theresa, or an actor, or Eric’s partner, or Lucy and Mandy and Millie and Ricky’s parent, it’s part of my identity.

One thought on “Identity”