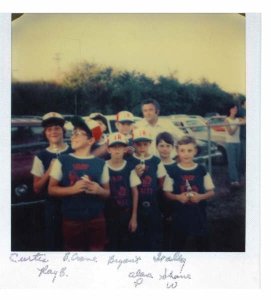 As a person who receives some satisfaction from documenting his experiences and thoughts in words and sharing those words with others, I sometimes I ask myself, what is it about my writing, my point of view, that is my essence. Who am I at my core? Obviously, I am an Angeleno, a reader, an art lover, a Kansan, a former New Yorker, a swimmer. But what makes me me? What are the hallmarks of my writing?

I was talking to someone last night and we were discussing our separate junior high and high school experiences. And I said that for me, junior high and high school are never very far away from me. For me, and perhaps it’s because those years were not what I wanted them to be, I can be in the middle of the most random moments, like taking a table’s order, or walking down Larchmont, or drinking my morning coffee, or driving along Mulholland (Full confession, I do not drive along Mulholland nearly as often as I should.) and suddenly, often inexplicably, I am in Ms. Willis’ Algebra II class, or receiving my 2nd place medal at a Chanute Forensics competition, or getting in trouble for talking too much in the Living Christmas Tree at my Bible college, or standing in the lunch line at IJHS.

And I don’t think I am the only one who finds his memories almost oppressively accessible. I think many people remember many things from 25 and 30 and 35 years ago, but often, people don’t like to wade into that muck. Because, really, it’s muck and often muck can weigh you down. The past is the past.

But you know, just to play Devil’s advocate, you CAN learn from your past. You can ponder it and say, I don’t want to ever do or feel THAT again. Or you can say, there was a purity or joy that I want to bring back. For instance, I don’t remember a happier childhood time than the summer or weekend days when I would visit my friend Chris and we would play all afternoon with his sister’s Barbies. I marvel at how much of my childhood was spent dreaming of having my own Barbie doll. Every September, when the Sears, JCPenney and Montgomery Ward Christmas catalogs came, I would memorize, circle, cast a spell on every single item in the Barbie and fashion doll pages of each book. It’s crazy, I know. So much yearning for something that the culture I lived in told me was bad.

On New Year’s Day, as I was swimming, I thought about my friend Alan, with whom I spent most of New Year’s Eve. I’ve talked about him here before from time to time. We grew up together in the same small town, but, probably because even then we could both smell the gay on each other, it wasn’t until our adulthood that we became friends. And now, he knows this too, he is one of my best friends. That night, as a group of us sat at our friend Traci’s dining room table, discussing Serial, (Am I the only one who has little doubt that Adnan did it?) we also talked about Independence, gossiped a bit, showed our LA friends the mugshot of a childhood classmate that had (Drew Droege in Chloe voice) recently come to our attention. While we laughed over Malbec and Mu-Shu Pork, a Happy New Year text came in from our childhood friend Curt. Curt and his husband live in Ecuador, but were in Independence the same weekend I was there in December and we got to connect. I told Curt that I was with Alan and he wished Alan a Happy New Year too.

While I was in Kansas, I spent a good deal of time, documenting the trip with Alan and another friend Joel. Joel and I knew each other growing up, but our friendship was cemented when we took Mrs. Spencer’s American Literature course through the junior college one summer. It’s a bit of a magic trick to make something written centuries ago feel personal and contemporary, but that’s what she did in that class. There were only a handful of us, but whenever I see someone from that class, we always nod our heads and say, “THAT was the BEST class.” And then the other says, “YES, it was!”

So, yes, that first weekend in December, Alan and Joel and I spent a great deal of time texting each other about the weekend’s sightings, happenings, uncoverings, nuances.

I ached to have a large circle of friends when I was growing up. I mean, I had some friends, but I remember a lot of Friday and Saturday nights hanging out with the Ewings, the Channings, the Stubings and Mr. Roarke when what I really wanted was to go to the movies with friends my own age. I don’t doubt that I was an oddball. I mean, I don’t think anyone else was tape recording episodes of The Facts of Life and listening to them over and over again every night as a lullaby before bed.

The thing is, what I really wanted to say, when I started this Miss Havisham of a blog post, is that I’m grateful for my fellow gays from Independence. Not long ago, one of us, probably Alan, uncovered on FB someone else from our little town, who, it appears is living a gay life in a large city, far from Kansas like the rest of us. In trying to glean as much info as possible from his profile, I got a sense, true or not, that he wanted and succeeded at putting a lot of distance between himself and his hometown. And I certainly don’t judge that decision, there is a part of me that thinks that way too. But, I also felt a little sad. Sad that he doesn’t seem to have an Alan or a Joel or a Curt or a Chris to say, “Yeah, I remember. Growing up in Independence sometimes SUCKED, but look at us now. Look at how fabulous we’ve become.”