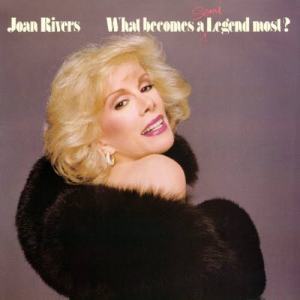 I had few friends when I was growing up in Kansas. That doesn’t mean I didn’t have a fanciful fantasy life. I had HBO in my bedroom where I watched Harper Valley PTA and Making Love, and the televised stage production of Vanities (starring Shelley Hack, Meredith Baxter and Annette O’Toole) every time they aired. I would read James Baldwin novels in the library because I was too afraid to check them out. I had every issue of Gentlemen’s Quarterly from 1982 on that I kept neatly stacked in the nook under my water bed. And I had a cassette tape of Joan Rivers’ What Becomes a Semi-Legend Most that I listened to regularly on my Sony Walkman. I did not understand at 15 or 16 precisely why I loved Joan Rivers so much, I just knew that I did.

Embarrassing confession: one time I went drinking with some high school classmates. I actually don’t even remember who it was, a group of 3 or 4 other guys. We were not close friends and I felt privileged and nervous to be out drinking Malt Duck at a place called The Spot. (At least I think it was Malt Duck and I think it was a place called The Spot.) I did not drink much when I was a teen, if you can imagine, so I was nervous that if I became drunk I might confess that I was gay. So, I got drunk and thought about how much I loved Joan Rivers. Please forgive me for my momentary departure from my blog’s strict PG-13 rating, but I actually confessed to my new friends at The Spot that I wanted to french kiss and yes, titty-fuck Joan Rivers. My new friends laughed. I laughed too. “See? You’re totally straight,” I silently congratulated myself.

In all honesty, I did think Joan Rivers was beautiful. I know at the time, part of her schtick was to make fun of her looks, but I didn’t get it. I thought she looked glamorous and sophisticated and stylish. She was so different than Kansas, what with her talk about Jews and plastic surgery and how Liberace wanted Tom Selleck to be his proctologist. When Rabbit Test aired on HBO, my Mom told me it was written and directed by Joan Rivers and I thought, my goodness, is there nothing this amazing lady can’t do?!?!

A few years ago, I went to see a screening of the documentary Joan Rivers: A Piece of Work with a question and answer session with the film’s subject and star. I went with my friends Traci and Linda, fellow storytellers, who had their own memories of growing up hearing and watching this comic genius, this woman who paved the way for other female comics. I don’t really remember any of the questions or any of the answers, I just sat there thinking, this is so cool, Joan Rivers is 15 feet away from me.

I’m not going to lie, though, there have been several times in the last few years where I’ve heard things that Joan said or did where I’ve thought to myself, oh no, Joan, too far! If something crosses the line and it’s funny, it’s comedy. If something crosses the line and it fails, it’s mean. If you’d asked me what I thought of Joan Rivers on Wednesday, my answer would have been less gracious than had you asked me on Thursday.

Since Thursday, like many people, I have been thinking quite a bit about Joan Rivers. I do an internet search every few hours to glean the latest news on the legend’s health status. Every friend I’ve seen in the last 72 hours, I’ve initiated a Joan conversation. I worry about Melissa, who is my age, and like me, her mother’s only child. I even keeping thinking about that horrible tv movie they did where they played themselves.

But back to me, for just a moment. When I remember that little freak whose best friend was a Joan Rivers cassette tape, I now think, that’s pretty funny, but a little sad. At the time, when I was that little freak, I thought my plight was almost entirely sad, but maybe, just a little bit funny. Malt duck, titty fuck, oh, grow up!

If Robin Williams’ passing reminded us of the fragility of life, Joan Rivers’ recent crisis reminds us of life’s absurdity. Flatlining during a minor procedure that was not even elective? It’s like the set up to a joke. Can we talk? Whatever happens, we know that comics will be riffing on it for years to come. If Joan Rivers survives and one day returns to doing shows, you can easily imagine her making light of the dark. And we hope she does and that she does and that she does. I read somewhere that in her show on Wednesday night, (btw, she’s 81, doing a live comedy show the night before surgery; that is grit.) she joked that she could die at any moment and what a story it would be for the audience members. ““Do you understand you would have something to talk about the rest of your life? You were there! ‘I was there, she just went over!’”

What’s the difference between comedy and tragedy? According to Mel Brooks, “Tragedy is when I cut my finger. Comedy is when you fall into an open sewer and die.” Others have said that comedy is tragedy plus time. And I am conforted by that idea, that the pain eases and humor emerges as time passes. It was certainly the case for the 15 year old version of myself.

It is kind of sweet to think of 15 year old me, holed up in my bedroom listening to stories about Heidi Ambromowitz and Marie Osmond making Debby Boone look like a slut and the Queen of England having an affair with her husband Edgar from a woman who made me laugh a lot at a time when I really needed a friend. I don’t know what the future holds for Joan Rivers. But whatever happens, it will be with the passage of time that her family and friends and fans process the outcome. Until then, we have no shortage of Youtube videos of Joan being Joan to make us laugh and ease the sadness. I’ve posted two here, one from The Tonight Show, circa 1982. And also, an episode of her web series In Bed With Joan from just a couple weeks ago where she interviews drag superstar Bianca Del Rio. It makes me a little sad to watch these videos, of course, but also a little happy too. Funny.