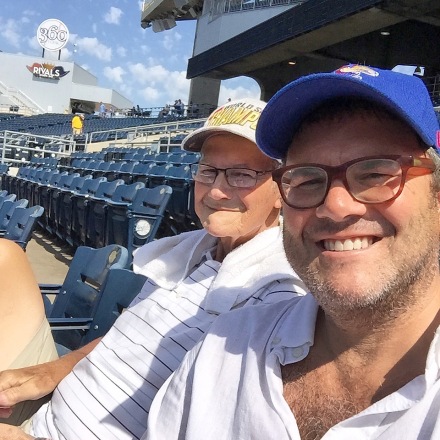 I am back in Los Angeles, have been home for several weeks now. The latest on my Dad is that, after a wait that was longer than we anticipated, he is three weeks into his seven weeks of radiation and  chemotherapy. I talk to my parents everyday and so far, he’s doing pretty well.

One of the highlights of my visit home was the day we went to a Kansas City Royals game.

I’ll confess I had an idealized picture of what our Royals experience was going to be: father and son, reliving some kind of glory days. When I was little, we went to a Royals game at least once a season. While it’s been documented that I was never a great athlete myself, I did love the spectacle of a major league game. Who doesn’t?

After waiting in the heat outside for nearly an hour, we got into the stadium and ambled to our seats. Seeing the green field and the sparkling fountains, it was as beautiful as I remembered it. We took a selfie. I posted it to Instagram and Facebook. We watched the activity around us. I went to buy a 9.00 glass of iced water.

About 45 minutes before the game was to began, my Dad got up to go to the bathroom. He did not come back right away.  About 15 minutes later, an attendant asked me if I was with an elderly gentleman. I told him I was.

“He went down. I’m going to take you to someone and she will take you to him. He’s in first aid.”

The gentleman passed me off to a young grandmother type who briskly walked me toward the first aid center.

“I’m glad they found you because you can help answer questions.”

“Is he not conscious?”

She opened the door and the first thing I see is my Dad, weary but very conscious with a wry smile on his face.

“Yes, don’t tell your Mom about this until we get home.”

He then explained to me that he became lightheaded when he got to the top of a long flight of steps and his knees started to buckle. Before he knew it, several workers had caught and carried him to this office.

A nurse was taking his blood pressure and pulse. She asked me what year he was born.

“And he’s being treated for cancer?”

“Well, he will be, we are waiting to begin his treatment.”

They made him an ice filled  bandana to wrap around his neck and we sat there for a few minutes. I asked the woman in charge of the facility what was next. She told us we could go back to our seats or leave. If we wanted to leave they could golf cart us back to our car.

“Can you help us find shadier seats? Maybe higher up?”

“Would we get a refund on our tickets?”

My Dad asked the woman in charge if he could use the restroom.

“So, what are you going to do? You can’t stay here,” she told me once he was inside the bathroom.

“I don’t know.” And I didn’t know. I didn’t know if we should leave and go home or rush to a hospital or what. I did not know if his collapse, while easily attributable to the heat, was going to be an isolated incident or happen again.

Why did I let us come here on the hottest day of the summer? What was wrong with me?

When he came out of the bathroom, I told him, only slightly louder than necessity warranted, “They’re kicking us out.”

He sat down again and I asked him, “What do you want to do? What do you think we should do?”

And so we did. We made our way back to our seats and my Dad sat with his icy bandana around his neck and the game began.  In time, the sun dipped behind the stadium and the shade was upon us all. It felt like a sign. After the liveliest 6th inning I’ve seen in decades, the Royals pulled ahead to an unstoppable lead.

I’ll be honest, as exciting as the game was, the entire time I sat in my seat, asking him if he was okay, wondering if we had made the right decision.

During the 7th inning, a storm that had been predicted, gave the first thunderous indications of what was to come.  At the top of the 8th inning, the score 7-2, I said to my Dad, I think we should leave to beat the rain.  He agreed.  It was fortuitous that we left when we did because the minute we got on the freeway, it started to rain.  And then it started to pour.  And then it started to pound.  My Dad and I, we laughed.  A nervous, dark laughter, on my part anyway, but it just seemed so unbelievable after the events of the day.  This wasn’t rain, this was a midwestern monsoon.  And I, not the best driver on even a good day, was at the wheel.

About an hour outside of Independence, my Dad, his socked feet on the dashboard, wriggling his toes, said to me, “I don’t know about you, but I’m glad we went. I had a good time.”

I laughed. Afraid another flash flood might still await us, I cautiously said, “I’ll wait until we pull up in our driveway before I decide if I am glad we went.” He laughed.

My Dad’s oncologist, when we visited him while I was in Kansas, warned my Dad of how challenging his treatment was going to be, the enduring effects this round of radiation will have on him, the quality of life that might be lost.  “I know it’s a hard road,” my Father told him, “but I want to go for it.”

Maybe it’s kind of crazy, but my favorite part of our Royals adventure was the next day. How both of us were a little giddy from our experience. Every time I walked through the living room, my Dad was on his phone, recounting the events to friends or family. My Dad, he likes to tell a story too.

“…I thought that nurse was going to make us leave…”

“…every time we thought the rain had stopped, it started again…”

Me too, Dad. But then, you already knew that.