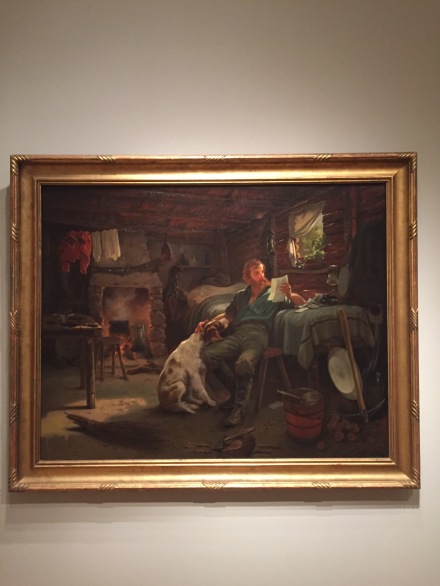 On Sunday, Eric and I took a day trip to Santa Barbara. We visited the Santa Barbara Museum of Art and, while it is partially closed, we thoroughly enjoyed the pieces that are currently being exhibited.

My favorite was a painting of a gold rush miner sitting in a small cabin, his dog nuzzling him. The young man reads a letter, and the dog stares lovingly at him. No surprise that it was my favorite. I read the placard on the wall. The artist Ernest Narjot, until yesterday unknown to me, had been a young man who was part of the California gold rush. In fact, apparently, the gold rush is what inspired him to leave his native France and go west. 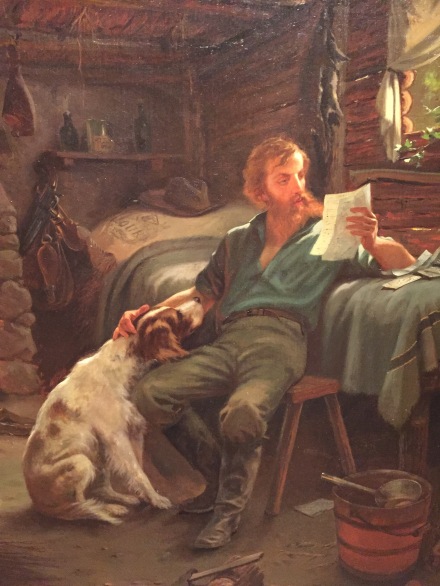 When I got home, I googled this painting in hopes of finding a crisper image. I couldn’t find one. What’s up, internet? What I did find were a few more biographical details about Ernest Narjot. How he wasn’t exactly the most successful gold rusher. And how now, many decades later, he is most known for his gold rush paintings. AND, most of his gold rush paintings were done in his later years, with a nostalgic element prominent in those works. It’s certainly here in this lovely portrait. He painted The Forty-Niner in 1881, when he was 55, a middle aged man looking back on another time.

Time flies, I know. Seems just yesterday, I was a young man leaving my own home and traveling far away in my own hopes of striking another kind of gold. Because today is September 11, I searched my old photos to find an old picture of me with the World Trade Center in it. I found a picture from 1991, from my first visit to New York, on a trip where I fell in love with the city the second I crossed the Holland Tunnel.

I was on a mission trip with my Bible college. I wanted more than anything to live in New York but I didn’t know if I would ever be brave enough to make such a big move. Clearly, it was a grim day, all clouds and some rain, but still to me, paradise. Less than a year after this trip, I was living in New York. There is a part of me that will always feel that the day I moved to New York is the day my life started.

So, today, on September 11, I reflect on the great tragedy of that day, the lives lost,  the people affected in New York and Washington and Boston and everywhere else.  We say we will never forget and I hope we never will.

But also, on a lighter note, I reflect on young Ernest Narjot who in 1849, left his own version of Kansas and moved to his own version of New York and then, eventually, created beautiful paintings that touched the hearts of wayfarers (and dog lovers) for years to come.

4 thoughts on “The Forty-Niner”