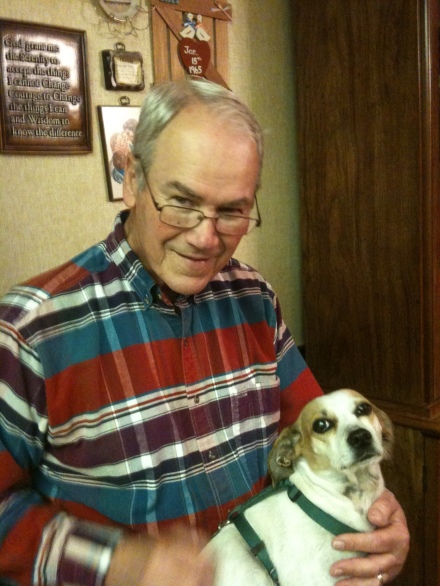 Just a few days ago, in my head, I started a blog post with the fanciful title of “Permanent Residence in the Land of I Don’t Know.” (I know, terrible. I’d like to think I would have changed the title before I published the piece.)

Anyway, the blog was going to be about all of the uncertainty I am in the middle of since my Father’s passing. We are still trying to figure out if my Mom can live alone in her house. I had made plans to take another leave from my job next week, with no certain decision as to whether I would stay in Independence or come back to LA. Within that uncertainty was, do I look for a job in Kansas or try to stay on family leave as long as possible? My plan was to bring Ricky with me and leave Millie here with Eric. Also, Millie has been sick for about a month now, and we felt that leaving her here with Eric was going to be better for her. We didn’t really know what was wrong with her. There had been several trips to the doctor with a few misdiagnoses. More unknowns.

On Sunday, on a follow up visit with the vet, one of the unknowns became known. Resoundingly known. Millie has abdominal cancer and she is dying. We are looking at days, not weeks. When the doctor delivered the news, it all made sense.

For the second time in just two months, that phrase “palliative care” plopped itself into my path, and now, not unlike what we did for my Dad, we are trying to make Millie’s remaining time as calm and loved and painless as possible.

You would think I’d be a wreck, and maybe I am. But I don’t feel like a wreck. I’m just trying to adhere to Millie’s needs, be aware of what she is trying to say to me. We keep her warm and fed (if she’s hungry). We tell her we love her and that she’s beautiful.

I will wait until Millie passes before I head back to Kansas now. So again, a bit more uncertainty. My Mom has a great support system in place and I look forward to being a more helpful part of it when I am able.

Like my Dad, Millie made it to old age. And yet, also like him, I won’t get as much time with her as I’d hoped for. Still, we treasure, cleave to, the good times.

And for now, in the midst of the uncertainty, I focus on the tasks ahead: her medicines, her food, her coddling.

Millie made one trip to Kansas where she didn’t go outside for 3 days because she hated the snow. My parents enjoyed spending time with her and Ricky when they came to California to visit. (Truth be told, my Dad liked Millie more than he liked the always barking or moaning Ricky.) Still, I only have a couple of pictures of Dad and Millie together. One of them ended up being in the slide show that was shown at my Dad’s funeral. I hesitated at the time, worrying that it might be an omen of what I feared was to come, but now that I know, I’m glad she was there. As you can see, it’s a great picture and reveals something about both of them. My Dad made room for everyone and Millie thinks every lap was created for her little butt. Eric and I, we always say, it’s Millie’s world and we are just living in it.

When people die, I know that talking about heaven is a comfort for some. If I was sure there was a heaven, I’m sure I’d be one of those people. I guess for the rest of us, we are forced to find out comforts in more tertiary forms.

I find comfort in knowing that as long as I live, their lives will forever be bound to each other. My most handsome father and my most photogenic dog. (With apologies to Lucy, Mandy and Rick.) My year of mourning will bring tears for each of them.

Now that I have had a few days to start processing the news about Millie, I am trying to be circumspect. And when she has good days now, the ordinary joys become something quite remarkable. We sit on the couch and she nuzzles me as I pet her. Her barking at dogs on the sidewalk elates us. When she bounds into the living room and pounces on the couch when she hears chicken being pulled out of the kitchen, we know, for this moment a least, all is right with the world. We only ever have this moment and at this moment, we’re eating chicken.

Oddly, there is something good about Millie’s illness. As my Dad was dying, what worried me most was what was going to happen to my Mom. Would she be okay?And in the days after I came back to LA, my heart and my head, as you can imagine, were still several states east.

Here was Eric, who had held down the home for four weeks while I was away. He took care of the babies, kept them fed, safe, loved. The version of me that made it back to LA was raw and wounded and depleted. Too much loss, anxiety and uncertainty, but then this thing came up with Millie. And suddenly, it was clear. I have to be here in LA until Millie passes. For the second time this year, I am assigned the role of caregiver. She is all I need to focus on right now. Millie is my world, our world. And when we get to the other side of this time, we’ll return to old tasks and find new responsibilities. And those next chapters will hold their share of uncertainties too.

But today, tonight, my heart is with our Millie, sleeping on the bed, her nose gingerly sticking out from under a blanket, who surely has no doubts about how much her Dads and brother love her. And my heart is with Ricky, our silly, moaning, happy son. And finally, my heart is with Eric, who wept like a baby when the dr gave us the news. We are a family and in time, our family will look a little different, smaller. But we will also always think, for a time, there were four of us.

And we’ll say we had longer together than we’d feared, but not as much time as we hoped.