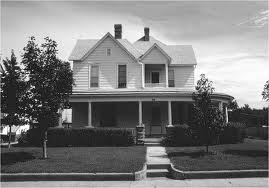 A few days ago, I asked Joel Williams, a longtime friend and another Independence, Kansas product, if he would like to be a guest blogger here.  We have much in common, but the one thing I think that binds us together is our interest, perhaps one could say devotion, to all things related to William Inge.  I love what he had to say and I know you will, too.  Here it is:

Independence. Does that mean Freedom?

What I don’t know is if Ray is looking for the same things in the work of Inge that I am. What am I looking for? Oh, of course I’m looking for the familiar, for signs of the past, for explanations of human behavior, especially those humans in Freedom, Kansas, Inge’s version of my hometown. I’m also looking for what my particular experience growing up in Southeast Kansas did to and for me. A decade or so ago, I bashfully told a friend about William Inge and my hometown, downplaying its significance, and he buoyed me up, comparing his experience and saying, “No one ever made art about Reston, Virginia.” I doubt the literal but not the essential truth of that statement. It made me take a deeper look at the matter.

When I was about 13 years old, my mother took a night class at Independence Community College (once attended by the playwright himself) that had Inge as its subject. She came home and discussed the class, the teacher, her fellow students, and, finally, the plays and the novels. I took an interest, slowly understanding that his work was all about people I knew. My parents pointed out the houses around town that figured in the plays. As adolescence proceeded and I came to regard my hometown as a closed, insular environ worthy of escape, I got even more curious about Inge. I learned that he performed his own escape act, moving away while casting his eyes back toward Independence and keeping his hands on the typewriter.

Every few years, I find myself going through a self-imposed Inge Intensive. I haul out “Four Plays,” then force my partner Roger to sit through a dinnertime viewing of Splendor in the Grass. Recently, I ordered my own copies of My Son is a Splendid Driver and Good Luck, Miss Wyckoff, and read them before flying back to Independence for the Inge Festival. Do enough of that reading and all you think is, funny, there wasn’t much freedom in Freedom – all those old maid schoolteachers accepting or rebelling against the strictures of small-town life and beauty queens dreaming of hopping a train to Tulsa to get together with shiftless bad-boy ramblers.

So, what are the results of growing up in The Real Freedom? I suppose that being surrounded by actual Kansas schoolteachers, beauty queens and bad boys while comparing them to their analogues on stage and screen made me acutely, intimately appreciate what an artist can do with words on a page and actors on a stage. Compared to other small-town natives I know, I think I see my hometown as something of a stage set, a place where Human Drama Happens. And I do occasionally find myself putting my life experiences into the narrative frame of an Inge play – oh stop it Joel, you’re acting just like Sonny! If I can’t have Bud I’m gonna go crazy, crazy!!! And when I think about the reason why I left Independence, I guess I was afraid of becoming a kind of old maid schoolteacher and yearned to run off to the city on a boxcar. So I did.