A couple days ago, my friend Barbara asked me if I was going to have guest bloggers. She said my post about pools prompted her to write something and wondered if I’d be interested in sharing it. I said I would be thrilled to post her piece. Not only is she the one person with whom I always talk books, she also recently won an award from the American Literary Review in the Creative Non-fiction category.

Opening Ray’s envelope inviting us to join him in the pool, the visuals drew me right in. I was a swimmer my whole life. My father threw me literally in the ocean at age three and said sink or swim. I swam. Later, being on the Cherry Valley Swim Club swim team defined me in my early years, and I loved it because: I was fat and I was not an athlete. When we played baseball and football on my street, I was put in the most unnecessary position and constantly yelled at to “stop dancing around and daydreaming over there and pay attention.”
In the water, I felt thin. My body slimmed down and smoothed out, weightless. Every Saturday morning we had swim meets, and I won trophies because in the water as opposed to on land, I could move swiftly. One week, my father, strict, overbearing and one of the most amazing long distance swimmers I have ever encountered, must have gotten up from the sidelines because in the middle of a relay race, as I was doing my turn, twirling under the water, my favorite part – action specific to dance, gymnastics, which on land I couldn’t master gracefully, ready to press my feet against the cement and push off to give me that added advantage the “turn” gives all swimmers, I heard above me that bellowing voice from the man the entire neighborhood was afraid of, my father, yelling, “You’re losing time on your turns!”
It wasn’t an instant transition; it took building our summerhouse on the jersey shore, therefore, shifting allegiance naturally to the ocean, but by the time I was in high school I found myself saying, “I hate pools.” Why? I would say, “Too confining, no waves, nothing happens; it’s boring.”
Reading Ray’s piece I thought: no, too hard.
I fell in love with the ocean because I succeeded there, on my terms and on my father’s, because, like him, I was fearless in the ocean. And the poetry of this story is the same ironic poetry my father invokes in most stories I tell about him: the strictest father on the street, he trusted us, so we had no curfew. He had no rules in the ocean. He too stopped swimming in pools because they confined him; no cement walls, no lanes. He stopped swimming in the ocean while the lifeguards were there because – as he put it one day when they dragged it out and drove off with him in the beach patrol jeep because he refused to swim in front of the stand, “I’ll be damned if anyone is going to tell me where to swim in the god damn Atlantic Ocean.”
He took me out as far as we could go, almost unable to see the shore (terrifying my mother). He taught me how to get back to shore when we were caught in a rip tide together once. I fell in love with the waves crashing this way and that, getting out past the surf and floating, on a raft or on my body – bearing absolutely nothing and doing my favorite thing in the world: daydreaming. 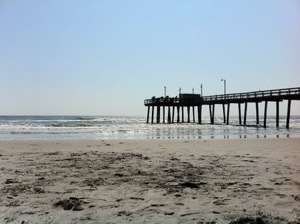