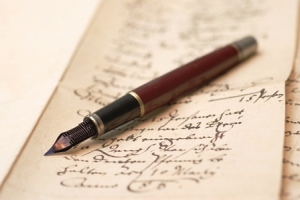 Funny story.  Several years ago, back in Bible college, my friend, who for the purposes of this story, I will call Dwight, was in the school’s library doing homework.  He needed to use a highlighter for something and he saw that a fellow classmate, I’ll call him Parker, had a highlighter laying next to him as he sat at another table doing his own homework.  Dwight walked over to Parker and asked if he could borrow his pen.  Parker, who we thought of as self-righteous, but in retrospect, was just perhaps a little on the awkward side, looked up in confusion.  “Is it okay if I borrow your pen?” Dwight repeated.  After a moment, Parker defensively answered, “It’s not my pen, it’s God’s pen.”

For some reason, that anecdote resonated with my circle of friends, the guys who lived on my dorm floor, we fancied ourselves young men who loved God, but did not fit the ideal mold of what Ozark necessarily wanted.  Parker, on the other hand, was evangelical catnip to the faculty and administration.  He always wore slacks and a tie, he was always so serious about God.

Last night, I wrote a blog about my Bible college and my perceived lack of compassion to the passing of a fellow alumni, another gay man like myself.  It ultimately turned into an explosive piece.  I heard from many of my former classmates today as well as a few people from OCC that I’ve never met before today.  I revisited this missive and I thought, did I really write all this?  Did I then really post it for anyone in the blogosphere to read?  Well, I did.  And just 24 hours later, I can admit my error.  There are things I said that I wish I had not said.  There are things I said that I wished I’d said with more eloquence and most importantly, more compassion.

My goal with that blog was to open people’s hearts, it’s my goal always when I talk about the relationship between the church and the homosexual community.  I read my post and think that what I said was so important, but I approached it so judgmentally.  So, for that I apologize.  This evening I received a kind message from OCC’s president, my former classmate, Matt Proctor.  He did not have to extend an apology, but he did.

Today, one of the many Ozark friends that I heard from was my friend Dwight.  We talked briefly about my blog and then I asked him if he remembered the God’s pen incident.  He told me he totally did, in fact, he and his wife still talk about it from time to time.  I told him that I always try to tell people the story and it never quite translates.  I wondered to myself, why did this story about God’s pen stick in my mind so prominently for so long.  What does God’s pen even mean?

Maybe it just means that God is the only one of us who can afford to use a pen, the only one who says it right the first time.  For the rest of us, especially for me, it’s better to stick with writing with pencils. Because the good thing about a pencil is that you can erase it and try again and erase it and try again until you say exactly what you want to say in the exact way you want and need to say it.