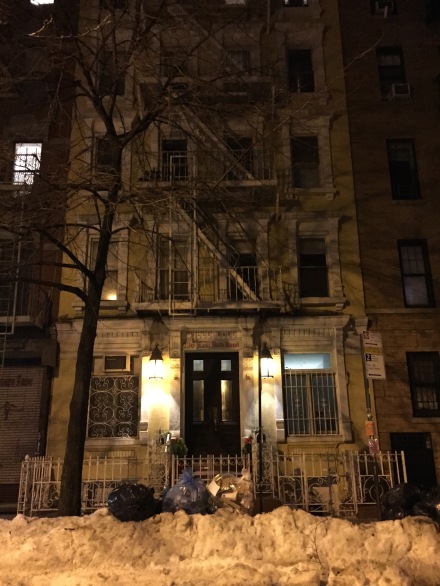 For a play that I claimed not to love, I certainly thought about The Humans for days and weeks after my trip to New York. There is a line that I’m sure I’m butchering in my memory. I’ve probably actually recreated the way the character said it. But at some point, someone said, something like, “You can go through life lonely alone or lonely with someone.” And the way I remember it, the line got a laugh and a bit of a tear. Like, either way, we are all a little lonely. I was a lonely kid, a lonely teen, a lonely adult, and now, as a middle aged man, I am still lonely. And you know, I have a partner, dogs, great friends, but I’m still, like Lenny Kosnowski, a lone wolf

After my friend and I left the play, that Friday night in NYC, we went our separate ways. Michael asked me to go to Joe Allen with him and his college friend, but I wasn’t up for it. Eric was back at the hotel. That morning, he woke up sick, so sick that it threatened to ruin the entire vacation for him.

We really needed this vacation. Our work lives had been frustrating in the weeks before the trip. There had been health issues with one of our dogs. In a two week period, every day, something bad descended on our little home. A dog bite that became infected. A betrayal from people I thought had been our friends. Money woes. If we could have backed out without the money we spent on plane tickets, we would have.

Anyway, after the play, I took the subway down to the Lower East Side to visit my friend Jon who was bartending. The teeny restaurant  was packed with New Yorkers, young and oldish, all glamorous, enjoying their Friday night. Jon poured me a drink and let me stand off to the side of the bar. His co-workers were all gracious to me, but the whole time, I felt like I was in the way. Also, that if it weren’t for the fact that I was in the way, no one would have even noticed my presence.

I finished my drink and thanked Jon and headed out. Contemplating a bus or a subway, I opted to walk awhile. I walked north, up 1st avenue and turned left onto 6th street. I passed a building that seemed to be the architectural embodiment of what I was feeling. Old, sad, weathered, crowded in by happier buildings all around. Garbage piled in front, on top of the melting snow. Twin porch lights flanking the door way.

Had I ever walked by this building before? I couldn’t remember, but probably I had. Probably I had passed by and not noticed.

This time I took a picture. I googled the address hoping to uncover significant history, like maybe Eliza Hamilton died there. (She did not.) I started to Instagram the picture, playing with filters and shadows and saturation but each time, what I captured didn’t seem Instagram-worthy.

I walked a little further north and grabbed a slice of pizza on 14th street and sat in the corner and charged my phone. After, I got on the 6 which went to Grand Central. I got out at Grand Central and walked through the terminal, then up a couple blocks back to my hotel.

The next morning, miraculously, Eric felt better. I’m glad too, because I didn’t want more nights like the lonely one I’d endured. If my favorite time to explore Manhattan solo is early weekend mornings, late weekend nights, is the worst. As I walked by every crowded bar and restaurant, gay, straight, mixed,  I expected to look through the windows and see 20-something me, standing in a corner, alone, hoping someone would come up to start a conversation.

Sometimes it seems I spent the first half of my life trying to make friends and then the second half, trying to keep a safe distance from relationships that have asked too much of me.

Every day, I posted Instagram pictures and went through my phone’s camera roll, deleting certain shots from the trip, #latergramming others. Again and again, I would return to the picture of the loneliest building in all of the lower East Side, maybe the entire isle of Manhattan. I couldn’t bring myself to post it,  nor could I delete it either.

And maybe you get this, maybe you don’t, but every time I look at that picture now, months later, it is a source of joy, no sadness at all. Well, maybe a happy sadness. Like somehow, as if appearing magically, on a crisp January night, when everyone else was light and gay, this lonely old building saw this lonely old soul, turning a corner, lost on his way home and shined the light to guide his way.

6 thoughts on “Around the Corner”