Yesterday, I was discussing the Broadway revival of The Glass Menagerie that I was lucky enough to see last week.  The person I was speaking with, an actress of a certain age, asked me what I thought of the production.  I told her that when you see a play like that, you have a hope that you are going to witness the definitive portrayal of these iconic characters.  I had hoped to see the definitive Amanda, the matriarch of the Wingfield family or the definitive Tom, the narrator and central, autobiographical character of the play.  In my humble opinion, that is not what I witnessed.  Both Cherry Jones and Zachary Quinto gave heartfelt, formidable performances, but I left wanting a little more.

My friend, I’ll call her Jane, said that an actor needs to understand the poetry of Williams to play his characters.  I agreed and admitted to a struggle with the poetry when I worked on another Williams character in an acting class.  “You know who would have made a wonderful Amanda?” Jane asked me.  “Who?”

I confess to you that I actually gasped a little when she said that.  “You mean Laura?”  I asked.  “No, Amanda.”  Jane went on to tell me that many years ago, she had been in the same acting class as Marilyn.  She told me her Amanda would have been something to see.  In some ways, I’ll admit, I couldn’t see it.

If you are a drama nerd like me, and you’re still reading this, no doubt, you’ve had your own opinions pop into your head about the possibility of Marilyn Monroe’s Amanda Wingfield.  Maybe you like the idea, maybe you hate the idea.  Whether over a cup of coffee or a Makers Mark neat, these are the conversations I love.

Because this is the way my little brain works, I think of what might have happened if Marilyn had played Amanda.  What might Amanda have unlocked for Marilyn.  There is something exciting about living with a character that helps us understand the world we live in and understand ourselves better.  Maybe Amanda could have saved Marilyn, maybe she wouldn’t have left this world so young.  And maybe Amanda would have turned Marilyn into a great actress, not just a compelling movie star.

And there is something else about yesterday’s conversation that I’ve carried with me.  It goes back to those possibilities.  I told Jane that Marilyn as Amanda sounded so wrong and Jane said, “It might be!  And it might be so wrong that it’s right!”  Maybe this conversation will unlock in me the practice to see the possibilities for myself, that Tom Wingfield isn’t the only one with tricks in his pocket, things up his sleeve. 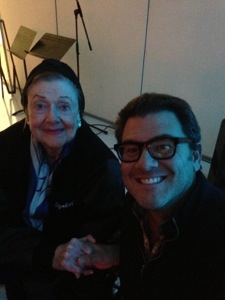 It’s 1:30 am and I’m in bed, trying to go to sleep but I can’t turn my brain off. I spent the day and evening taking in the William Inge Festival here in Independence. It’s an annual theatre festival and I have not attended one for over 15 years. There were several highlights but the big one for me was a talk with the actress Elizabeth Wilson. You might not know her by name but she was Ralph Fiennes’ mother in Quiz Show, Dustin Hoffman’s mother in The Graduate and is perhaps best known as Roz in Nine to Five. Most recently, at 91, she was in Hyde Park on Hudson as Franklin Roosevelt’s mother. There’s not a scene she’s in that doesn’t belong to her. I’m still thinking about something she said today. She was talking about working with Kim Stanley in the original Broadway production of Picnic. She said Ms. Stanley revealed so much that it was like she had no skin. As she said it, she grabbed her arm and pinched her skin. She told us that Inge was the same way, giving everything he had inside of him. Another woman in the panel, actress and writer Barbara Dana talked about how magical it had been to watch Elizabeth play Sonia in Uncle Vanya in the early 70s. And because I’m always thinking about age, I did the math and realized she was over 50 when she played her. Sonia is around 20. I have such a habit of limiting myself, doubting what I am capable of and there’s something so brave about a 50 year old playing a 20 year old. It reminded me to always see the possibilities. She also was told us a piece of information about Dolly Parton that surprised me and no, it’s not what you think. Anyway, it’s now 2:30 and I’m even more tired, but I wanted to share a little about my day. And if you ever see a 47 year old me playing Tom in The Glass Menagerie, you have Elizabeth Wilson to blame.