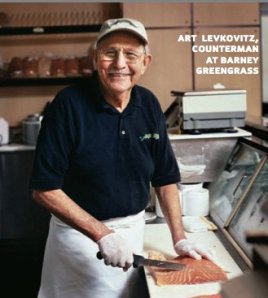 “You give them a good product, good service,” said Levkovitz, who has spent 50 of his 62 years in the deli business. “They come in, and over a period of years they feel at home. They live by themselves. If they went to other restaurants, they’re strangers. Here, they’re friends.”

The quote above is from an 1986 L.A. Times article about Langer’s Deli.  The man speaking was Art Levkovitz who worked there for over 25 years.  After he “retired”, he went to work at a restaurant named Barney Greengrass and that is how I had the privilege of knowing him.  He passed away two years ago at 86 on May 24, 2011. This morning I woke up thinking about him and his funeral which took place on the Sunday of Memorial weekend of that year.  I still work at Barney Greengrass and even now someone every day will ask about Art or tell us how much they miss Art.  Sometimes people offer stories about him, sometimes people get a little teary talking about him.  There are a few things that always make me think of him.  I have an orange Oxford shirt that once, when I was a little portlier, I wore it and 6 times that day he told me I looked like a jack-o-lantern.  I’ve never worn the shirt since.  I also think about, crave actually, his kippered salmon salad.  I know the ingredients: kippered salmon, red onion, celery, fresh dill, tabasco, lime juice, mayonnaise, but I will never know the exact recipe, the increments, that made it so delicious.  My other thing that I think about when I think about Art is how he always asked me how my parents were doing.  If you knew Art even a little, you knew his love for his family was at the heart of who he was.  He was always bragging about his son and daughter and grandson.  And you heard it in his voice every time he called his wife “sweetie” when he talked to her on the phone from work.

I have had a few friends over the years who have asked me when I was going to grow up and stop working in restaurants.  And by the way, if you are reading this and you were one of the people who asked me that and you’re wondering if I forgot when you asked me that, No, I have not forgotten you asking me that.  There is something inherently theatrical about working in a restaurant.  People don’t just go to a restaurant for delicious food, they come in for the experience.  Art understood that.

I don’t know how long I will work in restaurants.  I wonder about it, sometimes I worry about it.  But when I think about Art and the legacy he left and the way he touched people’s lives in the decades he spent working in this field, I do feel like I’m in good company.

One thought on “Remembering Art”